There are nearly one billion people in the world that don’t have access to safe, clean drinking water. For most of us, a drink of fresh, clean water is only a few feet away. However, in many developing regions the nearest source of water is a few miles, and the only water they have is, in most cases, contaminated.

These unclean water sources cause cholera, diarrhea, dehydration, dysentery, and in many cases, death. In one week, approximately 47,000 people die from a water-related disease; 90% of those deaths are children under five. That’s approximately 6,000 children every day or one child every 15 seconds. 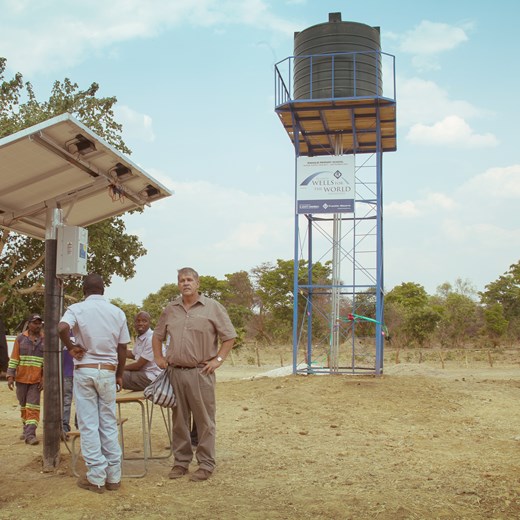 A majority of the world’s fresh water is buried hundreds of feet below the ground, and Franklin Electric is the world leader in accessing groundwater. Since the inception of Franklin Wells for the World Foundation in 2010, we’ve impacted the lives of over 160,000 people by bringing this water to the surface.

Our mission is to provide safe, reliable, and cost-effective water supplies to suffering communities, focusing on Africa, where the need is greatest. It is our goal to provide fundraising and technical resources for water projects, as well as provide global partnerships for charitable organizations.

Franklin Wells for the World is our effort and commitment to help end the global water crisis.

Learn About Our Past Projects

Over the last year-plus, Franklin Wells for the World Foundation (FWWF) put forth continued effort toward its mission to provide safe, reliable, and cost-effective water to suffering communities.

There are currently over 300 million people who do not have access to clean drinking water in Africa. Over 60 percent of that population has no access to sanitation, leading to numerous life-threatening diseases. Leveraging Franklin Electric’s innovative products, FWWF recently worked to benefit the lives of approximately 15,000 people. This included working with an orphanage, three public schools, and surrounding populations in the South African and Kenyan communities to provide safe drinking water and sustainable living conditions.

The Esfuleni Orphanage Centre cares for roughly 32 children ranging from 4 to 18 years old. With the surrounding population, this community totals approximately 700 people. Before the efforts of FWWF, this poverty-stricken community had lived without electricity and safe drinking water, inflicting a high level of waterborne diseases on its people.

Jabez Preschool is a new school located in the small village of Justicia B. The community holds a population of 3,000 people and previously had no access to education or healthcare. Many adults and children suffer from harmful diseases, including tuberculosis, HIV/AIDS, and malaria. Many adults are forced to travel to outlying areas for employment. Before the implementation of this school, about 70 children under the age of 5 had to walk over an hour, one way, to attend Mazinyana Preschool in the neighboring village.

Kaiyaba Primary School is a public school in Njoro District, located in Migaa Village. This school holds 422 students, and the surrounding community totals around 2,000 people. This community suffers from a high rate of intestinal parasites, life-threatening diarrhea, and skin infections, resulting from a lack of clean water.

Prior to FWWF’s efforts, the nearest source of water was a river 2 km (1.2 miles) away. The community used this water for drinking and bathing, and children had to carry their own containers of drinking water to school. FWWF was able to find a drill operator and source of potable water for the community to tap into.

Piave Primary School is a public school in Njoro District, located in Kahuho Village. It was started in 1997 due to overcrowding at a nearby school. This school holds 500 students, and the surrounding community totals around 5,000 people. This community has suffered from HIV/AIDs and other life-threatening diseases, which have left many children to be raised by their grandparents.

Prior to FWWF’s efforts, the nearest water source was a river 4 km (2.5 miles) away. The community used this water for drinking and bathing, and children had to carry their own containers of drinking water to school. FWWF was able to find a drill operator and source of potable water for the community to access.